The Portuguese Fado, the Philipine Kundiman and How an Artist Arrived at an Idea 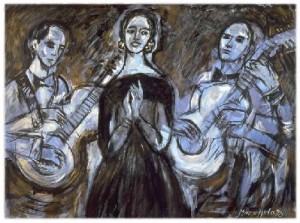 One of the defining moments in the direction of my musical career happened, of all places, in Portugal. It was the first time I encountered fado performed live in a cafe in Lisbon in the late ’90s. Sipping port in a smoky room, I found myself completely transfixed by this strange but familiar music. I loved everything about the performance – the Portuguese guitars, the virtuosity and the pained look of the female singer dressed in all black, like she was mourning.

I had no idea what she was suffering from but whatever it was, it was a compelling expression of it. I found myself inspired.

It reminded me of kundiman, the traditional Philippine art song of yearning and unrequited love. Although fado and kundiman are different in style, they both are singing about passionate longings – the Portuguese for their loved ones who perished in the sea during a voyage, and the Filipinos about their unrequited love, who were very poor and had nothing to offer except their undying devotion.

Now, I don’t consider myself an extensive kundiman practitioner (I only play some of them in my recordings arranged for solo guitar). I am more interested in attempting to get Filipinos to appreciate and respect it today much in the same way the Portuguese love their fado and who are very proud of it.

Both the Portuguese fado and Filipino kundiman are traditional art songs that demand very high level of skills and musicianship. And both art forms are tied to their national identities.

Yet fado is known around the world and its practitioners have evolved which resulted not only in the preservation of a traditional art form but a thriving modern iteration, while kundiman is largely forgotten and remains a relic of the past, with no presence at all in the mainstream media, not even in the Philippines. As to why that is, or if you disagree, feel free to offer your thoughts in the Comments section below.

One thing for sure, it has to start at the local level. The world music market is not going to suddenly pick up on it if there is no thriving scene and widespread movement in the mother land. Local artists have to lead the way in practicing, respecting, popularizing and redefining the genre.

Fado intrigued me because even though these songs are centuries old, it evolved into something that is very much alive today, music that a modern singer would choose to perform or a contemporary composer writing it. It is also a medium that measures the greatness of an artist. The great Amalia Rodrigues comes to mind.

Fado practitioners are also unafraid to modify it to suit their modern taste, to push the boundary or to create something loosely based on it. Now this idea of iterating a traditional art form into something new intrigued me.

I had this grand idea of doing that to the kundiman, and to other Philippine art forms like harana, for that matter. In fact, all my recordings reflect this – they are not exactly your grandma’s kundiman and harana. My most ambitious attempt is writing Lalawigan – A Tagalog Song Cycle. Among the twelve-song collection, I wrote a modern harana, an inverted kundiman, a take on the virtuosity of kutyapi players, and used archaic Tagalog. All with a very modern sound (see video below).

Successful or not, I love that I can do this. It is a creative framework that resonates, inspires and is meaningful to me. Best of all, it is a chance to arrive at a new iteration.

Thinking back to that moment in a Lisbon cafe, the irony is not lost on me – that I needed to go to a foreign land to truly appreciate my own country’s art. As a very eloquent friend and supporter of my musical endeavors Dennis Normandy wrote:

“I traveled the world in search of my muse only to find her waiting at home”.

Listen to a modern iterations of harana and kundiman from LALAWIGAN – A Tagalog Song Cycle:

This entry was posted in Featured Articles, Kundiman. Bookmark the permalink.

3 Responses to The Portuguese Fado, the Philipine Kundiman and How an Artist Arrived at an Idea